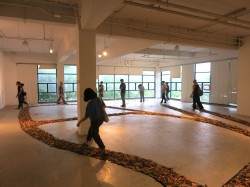 Tomorrows unitary world is in need of transcendence and liberation from a thinking in opposites. (George Czuczka)

The world is full of anxiety and of nihilistic emptiness. It is in spiritual and social crisis. What can we do about it? …

„Materialistic solutions do not work. (…) Separately and together, we may enlarge our conscious connection with the unconscious forces both in us and around us. There may lie the way out of our emptiness“, the US-Professor Ann Belford Ulanov states in the preface to a book called Imprints of the Future by Austrian emigrant George Czuczka.

„Becoming conscious of self means increased consciousness of others: self-interest becomes social concern“, she states.

Prospero, the magician and discoverer says in Shakespeares „Tempest“, when passing a door of transition: „the soul of everything living begins; where I am indivisibly this AND that.“ It´s all about awareness and connectedness, about meditation and healing and about spaces where people „can rest their minds and thoughts“ as Montien Boonma once put it.

We´re inviting you to pass the sound-installation „The Attention Gate“, which is kind of a poetic announcement for a stroll on the installation „Walk the Line“. A work of leaves, based on the idea and practice of walking meditation / Jong-Grom.
Every breath we take, every move we make is an essential part of our lives in the present. Paths of mindfulness, awareness can be everywhere. In our homes, offices, streets, museums, universities. They enfold like a rhizome as French philosophers Deleuze/ Guattari described the concept of a tree-like model for culture.

„L“ quotes and takes up the shape of Claes Oldenburgs notion of a ray gun.
A ray gun is a magical item. Everything with a right angle (the right angle is the structural principle) can be this gun, which never takes life but has an invisible energy and can penetrate everything and revive: everyday things and works of art. Important for a re-enchantment of the world, a world we can create, a world we want to live in. – „L“: like life, like love – but also like lies, …
The same work is refering to the early German art historian and cultural theorist Aby Warburg and his project and method of the „Mnemosyne Atlas“, in which he tried to focus on different cultures and searching for principles of structures within all the images and information.

„L“ is a mainly floor based phaenomenology of media related depictions of nature and life in Western and in Asian culture. Such providing a new perspective on everyday images, which are surrounding us. Using various techniques – from cut-up ready mades to collages, from colourful assemblages to slight variations of motives, working with stencils the work is discussing the cultural / media constructed status quo.
It´s about the beauty of untouched nature, the magic and the spirit of life and the idea of „the natural“, concepts of living and man made conditions of life and constructions of identities.

The participative spray-painting „Golden Years“ features artists and University staff as collaborative team: The concept sets the frame, the individual works are abstract comments. They´re all creating the big picture.

Further works feature views on the imprints of the here and now and possible transitions: In „Manna I + II“ all that remains is a text and an empty void as possible screen for projections of the reader/viewer. „Scopimera globosa – Global Media Output“ is looking for a metaphor for dealing with the contemporary information-overload and compares the media-contents to the tiny-sand-balls, made by crabs on the beach.

A separate room, which we called the „meta“-room provides information about our ongoing artistic researches and projects of the last months. (Including the collaborative work „Future Presents“, and documentations of Art & Science Talks in Nakhon Pathom and Bangkok at the Silpakorn University, and meetings & talks with artists in Myanmar.)
Interventions and works like „The Som-O-Experiment“ or „The colours of surface“ are to be experienced, both are „hands-on“-installations at the intersection of art and science. The first one based on scientific research on mirror-neurons, the second focuses on the physical reactions of different kind of liquids.

The installation „Lucky Corridor“ is made of grey cupboards by Siamese Steel and pays kind of tribute to Bruce Nauman among others. It´s settled between two stills of a 1963-TV-Talk between German philosopher Martin Heidegger and the Thai Monk Bikkhu Maha Mani, who discuss the differences between Western and Buddhist / Thai culture.
From the inner side of one cupboard you can hear a distant tune: „Dream Island“ by the Supreme Artist, His Majesty King Bhumibol. (From the year 1965). Which can be read as an echo from some far away past and a longing for an utopian paradise at the same time.

The environment „The Art Healing Project (Nakhon Pathom)“ functions like a stage for objets trouvés, playing with the notion of Arte Povera, and the idea of remastering the ready-made. It´s a set-up, in which trash, i.e. dumped / abandoned art from the garbage of the campus is given attention again.
The idea was to search and provide shelter, to restore (free it from worms and organic waste, repair it) and put it into new correlations. To recycle and respiritualize it. Such turning trashed art into conceptual art, thereby referring to what Sakarin Krue-On is calling the romantic conceptionalism.

Man made things are so fragile. And the power of nature is strong. Ars longa, vita brevis. Let´s hope that the official motto of the Silpakorn University, quoting Hippocrates, does prove right …

The global and urgent challenges of our time and societies are calling for healing on all levels.

May art step in? May art and science together be powerful enough to create visions and desires, which are strong enough to lead us, to support the development, evolvement and preservation of mankind on this shared home, this planet?

George Czuczka states – and thus bringing it to the point –: „Tomorrows unitary world is in need of transcendence and liberation from a thinking in opposites.“

May art contribute to open minds.

Triad of the Garden

Triad of the garden

Studies in Space and Desire

SEARCHING THE NET FOR UTOPIE 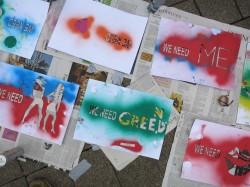 WHAT WE NEED – von MUELLER-DIVJAK
Tell us, what we need, what we really, really need!

END_OF_DOCUMENT_TOKEN_TO_BE_REPLACED 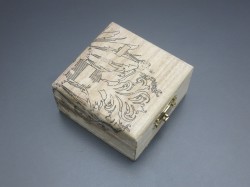 365 Days : LIFE MUSE
Model study for Nongpo community’s foreign labours
This interdisciplinary and collaborative art project by Baan Noorg Collaborative welcomes the participation of 19 artists and researchers with its main programs including a residency program in the Nongpo community, an artist talk program and an exhibition and forum at the Art Centre of Silpakorn University, Bangkok.